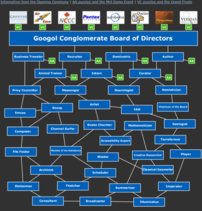 The Conglomerate blog, which has been covering business, law, economics, and society since 2003, is kind enough to provide an explanation of how it arrived at its name. The blog's founding pair--both law professors--considered several name candidates: Venturpreneur ("clunky and too hard to spell"), Punctilio (a key term in an important Supreme Court ruling; rejected as "too obscure"), Peppercorn (from contract law's peppercorn theory of consideration: used in too many business names, it turns out), Random Walk, Noise Theory, and Seamless Web (a phrase first used to describe the law in 1898).

In the end they chose Conglomerate. The blogging linguist Mr. Verb is as mystified as I am:

These guys chose the name for its 'businessy' sound, among other reasons. But their sense of the term is dramatically different from my own, and probably that of many readers of this blog. For me, conglomerate has a very negative ring to it. It calls to mind the buying of companies to drive up stock prices, where people got rich off manipulating markets, not by producing goods or delivering services. I'm just making a point about word meaning here, not about what's good business practice, but a similar view of conglomerates is laid out in this wikipedia entry, and also in this post on Conglomerate Monkeyshines.

I couldn't agree more. And I'd go even further:

Lawyers aren't known for world-shaking creativity in name development. Most law firms, after all, are simply named for their original partners. And lawyers are trained to scrutinize word meanings rather than word associations. But the art of naming requires a broader perspective, one that includes etymology and meaning but also reaches out to consider allusion, association, emotional resonance, and ear appeal. By those standards, Conglomerate--an earnest and well-reasoned effort--falls short.

Personally, I think they were on the right track with Peppercorn. If I'd been their naming consultant, I'd have encouraged further exploration in that direction.

Posted at 11:52 AM in Blogs, Linguistics, Naming | Permalink

They should have gone with "conglamorous".
daveB
p.s. Isn't it interesting how the pretentious extra "u" disappears from "glamour" in American English once you transform it with a suffix?