Whistling in the Graveyard

When you buy a house near a cemetery, you expect that the neighbors will be pretty quiet. That's not quite the case with my local necropolis, Mountain View Cemetery. Especially between Halloween and New Year's, the place is downright festive. In a weird way, it's kind of wonderful.

A bit of background. Mountain View was designed by Frederick Law Olmsted, who's better known as the designer of New York's Central Park. It opened its gates in 1863--in California years, that's practically the Middle Ages--just in time to welcome the earthly remains of assorted pioneers, Gold Rush millionaires, and robber barons. Even in death, these were not people with retiring natures. They liked to flout mortality with soaring marble and alabaster pyramids, obelisks, and mega-crypts that announced to their survivors, "You damn betcha you can take it with you." Mountain View's monuments would make Ozymandias blush. Look on my works ye mighty, indeed.

Mountain View sprawls over 226 verdant acres--it was a natural firebreak during the 1991 Oakland Hills fire--and its paths make for pleasant strolling, birding, and dog-walking. I admit I enjoy sneaking a peek at the funerals, too. We get all kinds, from solemnly choreographed police interments, complete with bagpipe flourishes, to hang-loose "celebrations of life" at which the mourners wear flip-flops and T-shirts. When the bluesman John Lee Hooker was buried at Mountain View in 2001, there was as fine a show of feathered millinery as you could ever hope to see. (Incongruous as it seems, the Mississippi-born King of the Boogie spent his final years in Los Altos, in the heart of Silicon Valley.)

But last Saturday Mountain View Cemetery was the setting for a celebration of a different sort: 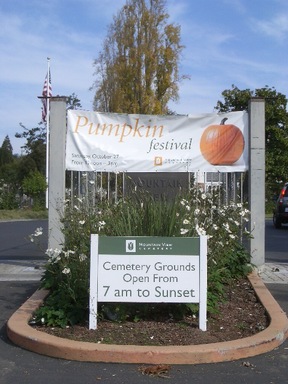 The Pumpkin Festival had something for everyone, or at least everyone who was short and young: jumper structures, a hay-bale maze, balloon artists, free snacks. Kids ambled amid the gravestones and sat on the steps of a mausoleum to check out their loot: 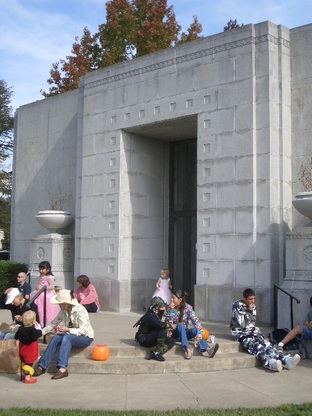 At about 1:30, a real live--well, real dead--funeral cortege rolled slowly through the gates and up the winding cemetery roads. The kids went right on jumping and snacking.

Meanwhile, just outside the gates, at the glorious, gothic-fantastic Chapel of the Chimes (built by Julia Morgan, the architect of Hearst Castle), the "Feast of the Angelitos" was getting under way. Kids and parents were encouraged to build nichos--altars inspired by the Mexican Days of the Dead--and to eat pan de los muertos.

Sunday night there was a "ghost walk" through the chapel's catacombs, followed by a reading by mystery novelist Hailey Lind, whose most recent book, Brush with Death, is set in the chapel.

Are other cemeteries having this much fun with death? I don't know, but I can't help thinking it's a very smart brand strategy. Mountain View and Chapel of the Chimes are making themselves part of our community's everyday life in ways that inspire pride and love: besides the Halloween activities, there's a magnificent tulip festival in the spring, a holiday light display at Christmas, and jazz concerts all year round.

How better to build positive feelings for a business that most people would rather not think about at all?

Posted at 07:45 AM in Branding, Holidays, Oakland | Permalink