More news on the vodka front: 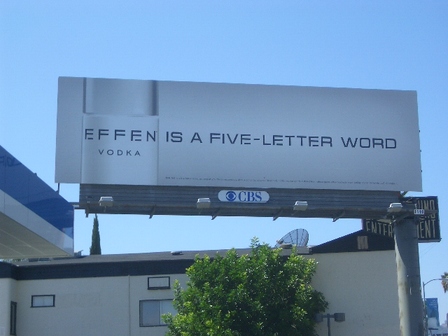 The slogan is yet another snowclone. "X is an N-letter word" occurs frequently in popular culture, e.g.:

UNIX Is a Four-Letter Word

Friend Is a Four-Letter Word (song by Cake)

"Diet" is a four-letter word (also here and elsewhere)

Smog Is a Four-Letter Word (title of 1957 L.A. Times column by Paul V. Coates, who noted that smog "is a comparatively new word in the American vocabulary")

And of course there's Bob Dylan's "Love Is Just a Four-Letter Word."

As for "Effen," spelled EFFEN on the product's website, it's Dutch for "smooth," "even," or "balanced." Each bottle is sheathed in a "seamless rubber sleeve" that's "hand-applied, one at a time, in Holland." (A condom for your EFFEN?)

The vodka itself is distilled from wheat, which you'll be relieved to know "contains a very low level of fat and fatty acid."