In the beginning, which is to say January 2007, there was I Can Has Cheezburger, a special place for cuuute kitty photos with absurdist, oddly spelled, strangely syntaxed captions. The captioned photos, also called image macros, became known as LOLcats, a blend of the "laughing out loud" acronym and "cats."

In April, Anil Dash (vice president of Six Apart, which begat TypePad, which begat this blog and many others) acknowledged and analyzed the phenomenon in his post Cats Can Has Grammar. Dash identified three primary formulas in LOLcats syntax:

Here, for example, we have "Geoffrey Chaucer's" LOLPilgrims, a.k.a. I Can Hath Cheezburger, a witty mashup forsooth: 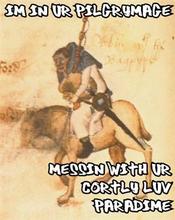 The LOLwalrus has a fetishistic attachment to a bucket.

Jezebel leapt gracefully into the act with LOLVogue (and here, too)--actual fashion photos with LOLcats-type captions. ("We're in ur magazeen, puttin werds on your mod-uls.") Which in turn spawned French LOLVogue. You'll have to link over to Jezebel to see the very clever, fashion-insidery images; they're in Bitmap format, which TypePad doesn't support. (Are you reading this, Mr. Dash?)

Mark Liberman at Language Log reported on the geeky LOLbrarians and the über-geeky LOLcode, or Feline-Oriented Programming.

LOLSecretz is a mashup of LOLCats and PostSecret (to which people send anonymous revelatory postcards). I love this one:

Recently we experienced a fleeting visitation from the aristocrats of LOLcats: Realisticats, who use "proper grammar" and tell brutal truths, e.g.: 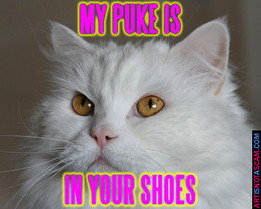 And now, lo, we have been blessed with The Holiez Bibul, a translation-in-progress of Old and New Testaments into kitty pidgin. Jump into the collaboration if you're feeling up to the task. For inspiration, here are the opening verses of Job 1 (all spelling and syntax intentional and authentic):

1. In teh land of Uz wuz a man calded Job. Teh man was goodz, afraid of teh Ceiling Cat and evilz.

4. His sunz tok turns mading cookies, and they all eated them.