« Keeping It Clean | Main | Whistling in the Graveyard »

Excellent with Steak. Or Stakes.

"I never drink ... wine," Count Dracula famously said. But if he did, he might choose this: 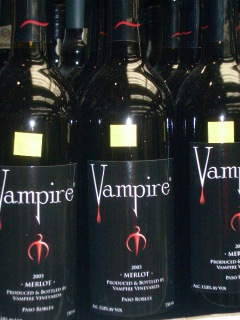 The wine department of my local grocery store is featuring Vampire wines this week in a Halloween display that also includes several other spooky labels: Phantom, Incognito, Dracula, Old Ghost, 7 Deadly Zins, and Gato Negro (black cat). Positioned nearby are some elegant-looking bottles of Vampyre Vodka.

Vampire and Vampyre are the creations of Michael Machat, an entertainment attorney from New York who started Vampire Vineyards without knowing anything about wine except that it's fun to drink.

“I had this idea that it would be cool if somebody had a wine called ‘Vampire’ and they made it in Transylvania," Machat told Brandchannel. "It was so obvious, I thought surely somebody had done it.” He started the company in the mid-'90s while he was living in England; since relocating to Southern California he's found a West Coast source to make his "blood of the vine," as his cheeky website calls it.

I haven't tasted Vampire, but I find the brand story eminently quaffable. "Welcome mortal," says Vampire.com's home page. The media page is called "Press Bites." And Machat is busy creating clever brand extensions: besides Vampire and Vampyre, there's Vamp NRG, a nonalcoholic energy drink like Red Bull; and Dracola, "the unearthly red cola for the children of the night."

And there are tchotchkes: "vampire bite" temporary tattoos, Vampire wine glasses, and--for $199.98--a Vamp NRG skateboard deck. You can even buy thematically appropriate DVDs of movies like Blacula and the original 1931 version of Dracula.

It's enough to give "serious" winemakers and connoisseurs the dry heaves, I'm sure. But it's a triumph of storytelling and branding, and I'll drink to that.