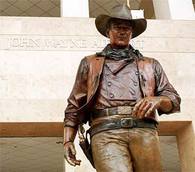 For the original quiz, go here.

1. Sioux City, Iowa. The airport's official name, Colonel Bud Day Field, honors George E. "Bud" Day, a Sioux City native and U.S. Air Force veteran of World War II, the Korean War, and the Vietnam War. Day is the most highly decorated U.S. military officer since General Douglas MacArthur. The airport, also known as Sioux Gateway Airport, was in the news lately because after 19 years its officials finally decided to stop fighting its FAA airport code: SUX. "If we can't beat 'em, we can make money off 'em," seems to be the general spirit.

2. Brasilia. As president of Brazil from 1956 to 1961, Juscelino Kubitschek de Olveira, whose mother was of Czech origin, oversaw the construction of the new capital city.

5. Warsaw. The airport in the Polish capital is named for the composer (1810-1849), who actually was born in Zelazowa Wola, in central Poland. He left his native country for Paris at age 20 and never returned.

9. Gdańsk, Poland. The airport is named for the former Polish president (1990-1995) and co-founder of the Solidarity movement. The "W" on the the façade of the passenger terminal is adapted from Walesa's signature.

12. Jedda, Saudi Arabia. King Abdulaziz (1876-1953) unified the kingdom of Saudi Arabia and was its first monarch.

13. Manila. Benigno "Ninoy" Aquino, Jr. (1932-1983), was a Philippine senator and opponent of President Ferdinand Marcos. He was assassinated at the airport that now bears his name.

16. Tirana, Albania. Agnes Gonxha Bojaxhiu (1910-1997), later known as Mother Teresa, was born in Albania. She founded the Missionaries of Charity and spent more than 40 years ministering to the sick and dying in Kolkata (Calcutta), India. Teresa won the Nobel Peace Prize in 1979 and was beatified by Pope John Paul II after her death.

17. Johannesburg. Oliver Reginald Tambo (1917-1993) was a leader of the South African anti-apartheid movement and a president of the African National Congress.

18. Guadalajara. Don Miguel Hidalgo y Costilla (1753-1811) was a Creole priest (Mexican born of Spanish parents); he is considered the father of Mexican independence from Spain.

19. Algiers. Houari Boumedienne was the nom de guerre of Mohamed Boukharouba (1932-1978), who fought in the war for Algerian independence from France and was Algeria's president from 1965 to 1978. He created his assumed name from the names of the patron saints of Oran (Sidi el Houari) and Tlemcen (Sidi Boumedienne).

20. Havana. José Julián Martí Pérez (1853-1895) was a leader of the Cuban struggle for independence from Spain. He was also a celebrated poet and writer.

21. Orange County, California. A nine-foot bronze statue of the Duke says "Hello, pilgrim" to everyone who enters the terminal. (See photo, above.)

24. Caracas, Venezuela. Simón José Antonio de la Santísima Trinidad Bolívar Palacios y Blanco, known as El Libertador, was born in Caracas in 1783 and died in Santa Maria, Colombia, in 1833. Together with José de San Martin, he led several independence movements in South America; the country of Bolivia is named after him.

25. Baltimore/Washington. This airport was renamed in 2005 to honor the late Supreme Court Justice Thurgood Marshall (1908-1993), a native of Baltimore.

Congratulations to Jessica of Beauty Marks, Kim of Knits with a Silent K, and Charles for their correct answers, and to Going Like Sixty for knowing the SUX story.

Extra-credit answer: Friedman Memorial Airport is in Hailey, Idaho, the gateway to Sun Valley. It's named for a pioneer Jewish merchant and his family. Other than Ben Gurion Airport in Israel, I doubt there's another airport in the world that's named for a Jew.

And here's a bonus answer to a question I didn't pose: In 2002 Speke Airport became Liverpool John Lennon Airport, in honor of that city's most famous native son. John Russell noted my lapse--more of an intentional omission, really--in a comment.

John Lennon is far from the only airport name I left out of my quiz. There's Louis Armstrong Airport in New Orleans; "Pappy" Boyington Field (for the World War II flying ace) in Coeur d'Alene, Idaho; Antonio Carlos Jobim Airport (for the musician) in Rio. In Mexico and many Central and South American countries, just about every airport is named for someone (usually a military hero). European airports, on the other hand, are almost always named only for their cities. The exception is Greece, where many airports are named after gods and historical figures from antiquity: Aphrodite, Aristotle, Hippocrates. Alexander the Great--even, bizarrely, Ikaros (a k a Icarus).

The Wikipedians have assembled a comprehensive list of airline destinations, to which I am indebted. If you're into airport codes like SUX and LAX, you can order stickers here.

Posted at 10:15 AM in Contests, Puzzles & Games, Eponyms, Naming | Permalink

Oh, I went right ahead and Googled most of 'em yesterday. So sue me.

St. Louis and Milwaukee have airports named after a Lambert and a Mitchell, but I don't know who those people were.

Orange: There's a fascinating Wikipedia entry on Albert Bond Lambert (1875-1946), who was a St. Louis police commissioner and--in 1907--a founder of the Aero Club of St. Louis. He bought his first airplane from the Wright Brothers. By the way, the St. Louis airport was originally a balloon launching field. Lambert was quite the ballooning enthusiast.

As for Milwaukee's airport, it's named for General Billy Mitchell (1879-1936), considered the father of the U.S. Air Force.

Ta Da!
Laffing that I didn't know the "real" name of the airport, but I knew the story. I have a head full of mushy useless information.
Thank you for the recognition!

It might be that Friedman Memorial Airport is the only one named after a Jew, save Ben Gurion.

But I think until someone establishes that neither the Cochabamba, Bolivia airport, Jorge Wilstermann, nor the Navegantes, Brazil airport, Victor Konder, are named after Jews the jury should remain out.

Strangely, there doesn't seem to be a Jesus Christ Airport anywhere, which could enter the lists.

Lance: Point well taken. I didn't get far in researching Wilstermann or Konder: Wilstermann was Bolivia's first commercial pilot; Konder was Brazil's minister of public works in the 1920s. Neither surname is identifiably Jewish. My guess is that both men were of German ancestry. Lots of Germans in South America. For all kinds of reasons.

No Jesus Christ Airport, true. But Mother Teresa is, like, what--two degrees of separation?

It still freaks me out to visit my in-laws in Houston and pass through the stupendously-named George Bush Intercontinental Airport there. Growing up in Indianapolis in the 60s and 70s, I always preferred the old name for that airport, Weir Cook Municipal, to the current, very generic Indianapolis International Airport.

Hoosier World War One air ace Weir Cook's Google trail now leads to places like an e-bay sale of a post card from the old airport.

As far as JC, how about Corpus Christi International Airport?

Remember when there was trouble over giving a nuclear-armed submarine that name?

Wistermann of Bolivia most likely was not Jewish because ithink the Germans used the double "nn" to signal that fact.

Charles: Often true, but not always. My paternal grandfather at one time spelled our surname "Friedmann." Another example, off the top of my head: Frieda Loehmann, the (Jewish) founder of the discount retail chain Loehmann's.