The Simpsons: An Oral History 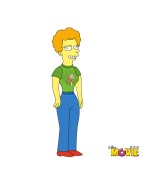 Ortved interviewed about two dozen people for the article, including writers, producers, voice actor Hank Azaria, animator Gabor Csubo, and former Fox network chairman and CEO Barry Diller. He even got to News Corp. CEO Rupert Murdoch, who claims that when he saw a 20-minute compilation of early Simpsons animation from "The Tracey Ullman Show," he said, "You gotta buy this tonight." (Murdoch also takes credit for scheduling "The Simpsons" opposite NBC's seemingly unbeatable "The Cosby Show," which went off the air one season later.)

On the other hand, Pulitzer Prize–winning cartoonist Art Spiegelman (Maus) was skeptical:

I pleaded with Matt and advised him strongly from my elder-statesman position to not work with Fox. "Whatever you do, don't work with those guys! They're gangsters! They're gonna take your rights away!" He's never let me forget it.

Check out Vanity Fair's picks for ten funniest Simpsons episodes ever. With one exception, all of the episodes on the list aired during the show's first eight seasons.

P.S.  Just one week till the opening of "The Simpsons Movie." Register at the official website to create a Simpsons avatar like mine. (Hat tip to Bill Walsh at BlogSlot.)

P.P.S. In case you missed it last month, here's a link to the Simpsons Brand-o-Rama.

Posted at 06:32 AM in Branding, Film, Journalism, Simpsons, Television | Permalink

Thanks for the Simpsons links. I hadn't seen the Vanity Fair piece. My sister, a Harvard Lampoon alum, was a Simpsons show animation director off and on for a few years and worked on the movie too. She's just left LA for a cross-country road trip. I'm meeting her in Iowa and we'll drive back to my house in NH. Maybe we'll stop in Springfield.

Amy: I'll bet your sister has some good stories to tell! As long as you're in the neighborhood, will you and she be attending the Simpsons Movie premiere in Springfield, Vermont?

Nancy, looks like we missed it. It was July 21. D'oh. Who knew Vermont would beat Illinois?

I am one of 200 volunteers who appeared in the winning Springfield Vermont Simpsons contest video. We were so happy when we won until our chamber of commerce turned against us. They made the decision to exclude us from the invitation list, awarding our seats to the elite members of the community instead. And not even a word of thanks or mention of us in the public ceremony outside the theater!

But a big thanks from us to all the thousands who voted for our video on the USA Today website. It seems we were more appreciated on the internet so I created a website of our own. Experience the sights and sounds of the big movie premiere in the small town, just click my name below....