Resolved: that New York rapper Mims is hot. Can there be any debate? After all, he tells us so himself, over and over, in This Is Why I'm Hot, which a few weeks ago was #1 on Billboard magazine's Hot 100. E.g.: "I'm hot cuz I'm fly/You ain't cuz you're not." Res ipsa loquitur.

But can we assess Mr. Mims's hotness using science and logic? That was the challenge Rob Harvilla of the Village Voice took on a couple of weeks ago. His graphical dissertation on the song is both a brilliant parody and the best use of graphs in the service of a hot topic since An Inconvenient Truth.

Consider just one of the Venn diagrams in Mr. Harvilla's piece, an explication du texte of one line in "This Is Why I'm Hot." (I've chosen it for reasons of shameless geographic chauvinism.) 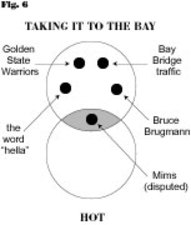 More than merely an elegant bit of visualization, the diagram displays an intimate and affectionate knowledge of the San Francisco Bay Area, so very rare in a New York writer. How many Voice readers, I wonder, know the identity of Bruce Brugmann? (Answer: the publisher of the San Francisco Bay Guardian since approximately the mid-fifteenth century.) And you gotta give the man props for hella, which originated right here in Oakland and is honored in many fine products.

Mr. Harvilla is, without a doubt, hot.

Posted at 08:41 AM in Design, Humor, Journalism, Oakland | Permalink

My students (11th graders) will love this piece! We've been discussing logic/persuasion and logical fallacies. The rap gods have smiled on me...Thanks for the hook up!