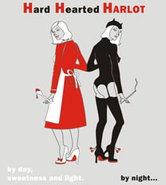 Thanks to the Manolo (who loves the shoes!), I now know about the definitive CFMQ shoe brand* (and also **): Harlot. Manolo asks, quaintly and plaintively, "Is the Manolo the only person who remembers when being called the prostitute was not the good thing?" Ah, Manolo, you Old World gentleman, you--if you could hear what the young girls call each other these days, in jest and sans malice, you would rejoice that they are at least reviving a term with a venerable if not exactly glorious history.

Next, venture capitalist Fred Wilson, of the widely read A VC blog, has written an admiring post about Startupping, "a community resource for Internet entrepreneurs." Great concept, but I couldn't stop giggling over the name, which I read as Star Tupping. (Tup, v. tr. and intr.: to copulate with a sheep. In this case, evidently, a celebrity sheep.) Even casual students of Shakespeare will recall--or at least won't forget, now that I'm reminding you--Iago inciting Brabantio by telling him (Othello, Act I, Scene 1), "Even now, now, very now, an old black ram is tupping your white ewe." Well, I guess even Internet entrepreneurs have to sleep with someone, or something, to get ahead. (By the way, TUP is also the ticker symbol for Tupperware, home of the burping seal.) (And as far as I can tell, English "tup" is unrelated to Yiddish "shtup," etymologically anyway.)

* I was greatly surprised not to find the acronym CFMQ in any of my usually reliable sources, on- or offline. I've been hearing and using it for years, decades even, in reference to a particular type of shoe--high of heel, revealing of toe cleavage, and just this side of fetishwear. The initials stand, more or less, for Come Tup Me Quickly.

** I did, however, discover radio station CFMQ in the town of Hudson Bay, Saskatchewan, which calls itself the Moose Capital of the World. But if you were expecting a ribald remark about moosetupping, you are going to be disappointed.

Posted at 06:41 AM in Bad Names, Naming, Shoes, Yiddish | Permalink

My dad used to take me to up Nova Scotia over Christmas breaks, and we'd bow-hunt the wily Burping Seal.

We'd sit out on the frozen bay, listening intently, and soon enough, the sound would rise up from below the ice..."BrrrrrrrrAAP!"