You already know, don't you, that shoe designers bestow names on each of their creations? Sometimes the name is historical, like the Ferragamo Audrey, named for fashion muse Audrey Hepburn. Sometimes it's geographical: Donald J Pliner named this skimmer "Haifa," and who's to say he shouldn't? Sometimes the name is whimsical, as with most of Stuart Weitzman's styles: say Beltitout slowly.

But when it came time for the naming gnomes at the shoe manufacturer Elle to dub the shoe pictured here--a driving moccasin, it's important to note--they abandoned all precedent. And common sense. For reasons best known to them and their caseworkers, they chose to call the style "Nervous."

Both hands on the steering wheel, please. 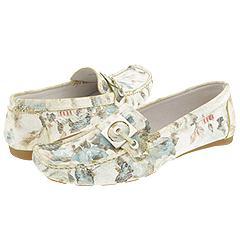 In 1997, Nike released a women's running shoe called the Incubus.

Wow, that shows what they know. The incubus is the *male* sex-demon that visits in your sleep. The female version is the succubus.

They decided to recall 38,000 pairs of them after somebody looked in a dictionary.

The name may well be why the shoes are now at Sierra Trading Post! A woman's driving shoe named "Nervous"! Someone took their road rage to the naming meeting. It's amazing such clearly crazy name choices even get past the design stage, let alone all the way through production and to market. The job I've always wanted is naming lipstick colors.

TwirlGirl--I agree, naming cosmetics sounds like oodles of fun. (Are you familiar with the Nars blush color "Orgasm"?) The closest I ever got was a fragrance-naming assignment for a mass-market retailer. The fragrance hadn't yet been developed; we were naming only the concept. Interesting stuff!