« Laughing All the Way to the Bank | Main | Characters » 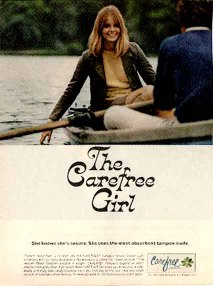 In his latest "ad report card," Slate critic Seth Stevenson manfully takes on Playtex's new campaign for a tampon it's calling "Playtex Sport." (The tagline--honestly!--is "May the best protection win.") I haven't yet seen the spot, but I enjoyed Seth's description of "several crotch-centric shots, including a gymnast with legs splayed wildly and a snowboarder in a strained, midair squat." Yes, that's what we gals like to do, any time of the month!

I have to take issue, though, with Seth's argument that the campaign represents a bold new direction in tampon advertising, away from fearmongering (will I leak? will he notice?) and toward a more athletic image.

Unlike Seth, who is venturing into terra incognita here, I have some intimate knowledge (so to speak) of the subject--and not only because ain't I a woman? Many years ago I researched and wrote a book about tampons (it's waaay out of print, but immortalized in Straight Dope, which misspells my name only once). [Update: The misspelling has been fixed!] I was the first journalist allowed to tour the Tampax factory (then in Palmer, Massachusetts), and I may have been the first person to have had a tampon museum in her basement (tragically lost, or rather absorbed, in the Great Berkeley Flood of 1985). I also studied the rich lore of tampon marketing, which brings me to the subject at hand.

The "feminine protection"-sport connection is actually quite venerable, dating back at least to the 1960s. The marvelous online Museum of Menstruation and Women's Health (MUM.org; my name is misspelled there, too) reproduces a 1982 Stayfree pad ad featuring gymnast Cathy Rigby; a few years later, Mary Lou Retton hawked "petal soft" Tampax. (Only Rigby is depicted in crotch-centric action.) Tampon manufacturers, eager to deflect attention from their product's bizarre reputation as a deflowerer of virgins (a myth fomented largely by the Catholic Church), often touted "active lifestyle" as their product's main benefit.

Three boys are sitting on the stoop on a summer's afternoon. One of their fathers, exasperated that the kids are just sitting around, gives them five bucks and tells them to go amuse themselves. As they walk down Main Street they debate what they should do with the money. Should they buy a deck of cards? A football? Play in the arcade? "Wait a sec!" says one of the boys as he runs into the drug store. "Wait here!" A few minutes later he comes out with a package of tampons. "You idiot!" his friends shout. "We were going to have some fun. What are we going to do with those?"

"Look what it says right here on the box," the boy replies: "You can go horseback riding, you can go swimming..."

(Yes, that's carefree girl Cheryl Tiegs up in the left-hand corner, in an early-1970s ad for Carefree tampons. Hat tip to Museum of Menstruation.)

Posted at 06:47 AM in Advertising, Tampons | Permalink

That was a lot of tampon information. I feel so fresh after reading that. Thanks!